Hello,
I am trying to install the NRP from source on Ubuntu 20.04 (even though I already have the docker installation). I follow the instructions (https://neurorobotics.net/Documentation/latest/nrp/source_install.html) but get some errors regardless.

First things go wrong in point 3.7. The $CMAKE_PREFIX_PATH, $PKG_CONFIG_PATH, and $GAZEBO_MODEL_PATH are defined and contain the paths in question, but the appropriate folders do not exist. The end of my .bashrc file is as follows:

bash: /home/maurice/Documents/NRP/GazeboRosPackages/devel/setup.bash: No such file or directory

Then in step 6.1 the nginx cannot be restarted:

I would be grateful for your help with tackling these problems.
Best regards,
Mikołaj Miękus

First step 3.7 tells you do add the variables for the later gazebo build (step 9). So if you get troubles, you should get them only at step 9 as build errors. It is ok if the folders don’t exist at the time of 3.7.

It is also normal that you get this setup.bash not found error from bashrc before the build is complete (step 9).

Step 6.1, nginx not starting. It could be that you have another instance of nginx running in the background. Check with

Could be also that your ports are blocked by either a firewall or services. Check with

Could be also that your docker NRP is running and blocking ports. Consider shutting it off with

from your docker installation folder.

You can use the

command to test nginx independently of any script.

For step 8.2, I would follow their instructions and use – force. You seem to have a prior installation of nvm (maybe you tried a first source install before). The warnings, you can safely ignore.

Thank you, this helped.
Unfortunately, when I ran ./update_nrp build --all from the step 9.2, the configuring did not get completed. There are some 3rd party packages missing (and apt-get cannot find them). This is the end of what got printed. Could you please help me understand what it tells me to do?

These are the logs that were mentioned:
CMakeError.txt (2.8 KB)
CMakeOutput.txt (46.8 KB)

You need to install the ogre and qt5 libraries

Thank you. That seems to have solved some issues but not all:

I’d try to install those and rebuild.

I have tried that but apt-get cannot find them. 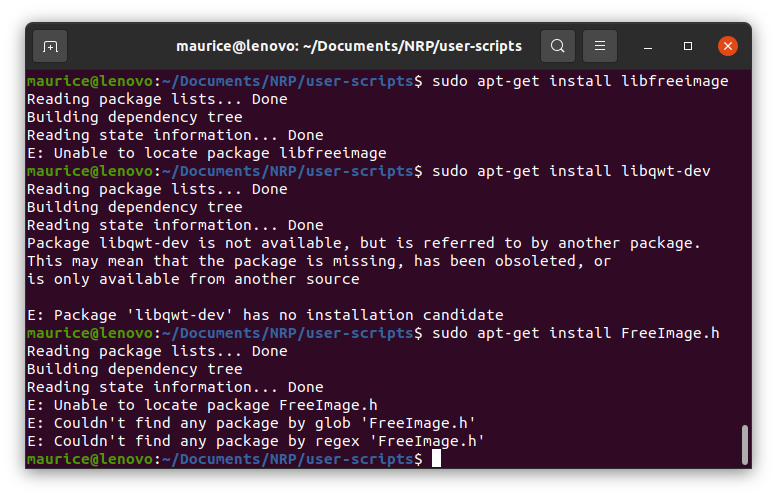 You have to google for their ubuntu package names. Here is a full list of packages which you can search.
https://ubuntu.pkgs.org/20.04/ubuntu-universe-amd64/

Thank you. Now while building I am getting more errors: 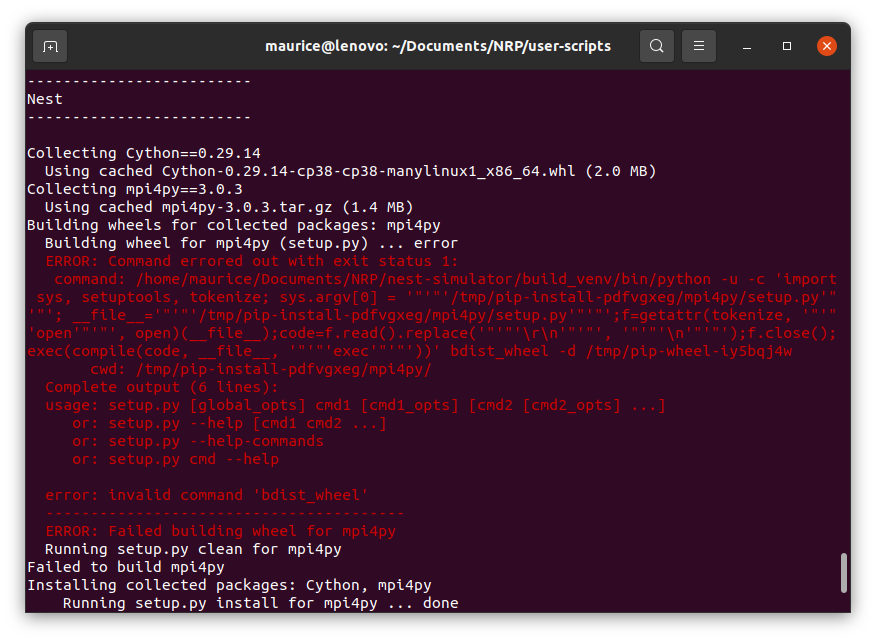 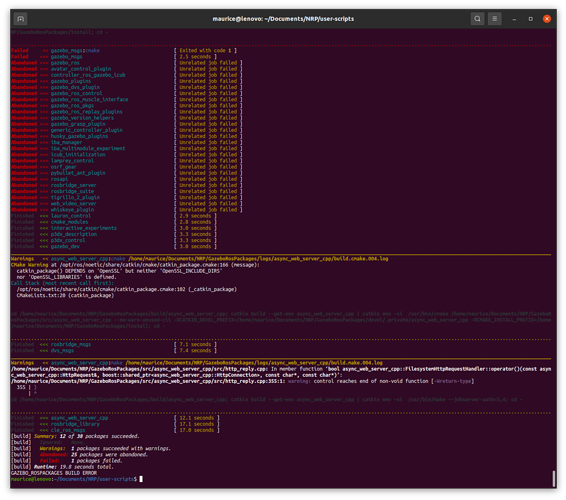 Screenshot from 2022-03-02 19-46-22.png1389x1225 267 KB
If I understand correctly, I just have to install appropriate packages? But where can I find the actual names of the packages? After installing several similarly-named packages I found one that seemed to solve one of the errors (and its name was not even explicitly listed in the link you have sent above). There surely is a better way to find the names of the packages needed? I would appreciate your advice in this regard.

PS. What I mean is: where can I find that instead of, for example, sensor_msgs I should actually use the name ros-noetic-sensor-msgs?

Regarding your last question in the PS, this is a question about Linux in general. When you get build errors, they mention missing files or missing library files on your system that are generally part of ubuntu packages, sometimes pip packages and the names generally differ. It is of common use when building for Linux to google the missing files or libraries to find out how the ubuntu package is called.

About the errors you have, I guess you have many missing libraries, like libssl-dev (maybe you installed a desktop only version of ubuntu, stripping off development packages?).

My suggestion would be to use the docker version of NRP, which you have already. Installing from source is meant for Linux experts and developers. The Docker NRP is meant for regular users and has an easy installation process.

Then why the tutorials require me to have the source installation?

Which tutorial are you following?

The first one, about the baseball experiment.

I reached out to the development team and I have good news. A recent addition to the docker NRP enables to run an ipython notebook from the docker containers. The tutorial doesn’t mention it yet and should be updated (thanks for the heads up by the way!).

So, I would suggest that you be sure to shut down all services from your failed source install:

Then start your docker NRP and connect to the backend container:

In the terminal that pops up (you are inside the container), you can run the tutorial as described. Just skip the update_nrp command at the beginning of course.

When you run, at the end of the tutorial page the

line, the notebook server is started. You can then access this notebook from your host computer (open a browser window and give the notebook port on localhost:

If this port is not usable on your system (already used for example), you can change it with the -np option while starting the docker NRP with ./nrp_installer.sh.

A ticket has been submitted for the dev team to update the tutorial:
https://hbpneurorobotics.atlassian.net/browse/NUIT-286

Thank you, that’s great news. Unfortunately, my 8888 port seems to be taken, but even if I start the platform with, e.g. ./nrp_installer.sh -np 8889 start, jupyter notebook still tries to use the 8888 port.

You need to start the jupyter notebook in the container from the same different port. From the container terminal, in the my_first_experiment folder, give:

You should get the following output:

Then open the browser from your host machine and give the url with localhost.

Thank you. I did that, and now in the terminal everything seems right. But no matter which port I choose, I cannot access the notebook from the browser. I get messages that Firefox of Chrome are unable to connect.
(And I can open notebooks when I start them from outside the container.)

Ok, I gave it another try and owe you more details as follows.

sorry I missed that point earlier.

Though, on my side, either ports (8888 or 8889) are unavailable from the host browser (ERR_CONNECTION_RESET) and I guess that’s also what you get.

I am forwarding this to the development team as a bug report and hope that we get a quick fix or work around from them.

@mmiekus Try this when you want to run the Jupyter server inside the backend container:
cle-virtual-coach ipython notebook "--ip=0.0.0.0" tutorial_baseball.ipynb
Also consider that you must run this command inside this folder:
/home/bbpnrsoa/nrp/src/Experiments/tutorial_baseball_exercise